There are a number of new medical devices popping up on the market nearly every day. Many Idaho residents benefit from the use of these devices. They range from items that are as simple as a knee brace to the complexity of IVC mesh implants and everything in between.

When these devices work, they can change lives and can allow people who live in Idaho to experience life to its fullest instead of being limited by medical issues. But, they don’t always work.

When medical devices are defective it can cause enough damage to put people back where they started and, sometimes it makes the condition worse than it ever was or creates a new condition that was never even thought of before using the device. In such cases, it’s time to turn to an Idaho defective medical device lawyer.

What Makes a Device Defective? 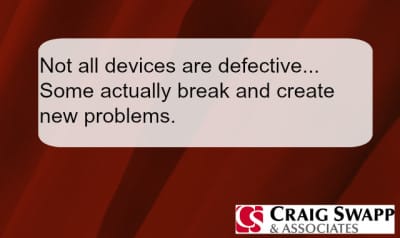 Any time you have a device that is supposed to perform a task and is unable to do that task, it is defective by passive means. Not all devices are defective in this manner.

Some actually just break and create new problems. Others actively do something they shouldn’t, even though they are being used properly.

There are some instances when a medical device is not just defective for one person, but for many. It may contain a flaw in craftsmanship, engineering, or even the material that was used to make the device.

The thing is, any defective medical device case always starts with just one person. It may turn into more people as the device causes more problems, and eventually more people come forward, but there has to be someone who begins the process.

Why You Need an Idaho Defective Medical Device Lawyer

Idaho lawyers who work with these types of situations understand the kind of research required to learn whether this is a single issue or if this is something that is ongoing for many people. But that research doesn’t start until more information regarding the first case is uncovered.

Although many people may eventually experience the same problems, every situation is different. For example, if you approach a lawyer with a medical device that simply was not designed to be used the way you were told to use it, the issue isn’t with the device, but the physician who told you to misuse it.

At the same time, if your device failed to perform the way it was supposed to, it’s time to look and see if the FDA has issued any warnings regarding that particular device.

What You Should Do About a Defective Medical Device 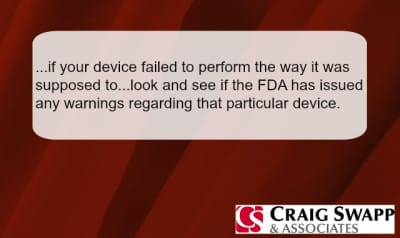 If you are having problems with a device you are using, or you know someone who is, the first thing you need to do is speak with your medical professional about other options.

If the device has made your situation worse or may do so in the future, it’s time to contact an attorney. If you are unaware of and haven’t experienced any issues, it still doesn’t hurt to contact an Idaho defective medical device lawyer. At least then you can determine if there is an ongoing issue with your particular device and what recourse you have available to you.

If there is a possibility that you or someone you love has used or is using a defective medical device, you can’t afford to take the chance of waiting. Although these types of cases are complicated, they can also lead to very severe, long-term injuries. Contact our office online or call (800) 404-9000 for a free consultation.