As if cancer isn’t bad enough, the side effects of the various treatment options can be grueling as well. Some individuals even report that the treatment side effects are worse than cancer itself.

In any case, until a better treatment method than radiation or chemotherapy is available, patients need to be able to treat the side effects they suffer from in the best ways possible.

One of the biggest side effects is nausea, which is why Zofran became such a popular medication for cancer treatment. Zofran was developed to combat nausea in those undergoing specific types of treatment for cancer.

However, the drug was eventually marketed to treat nausea in women, with disastrous results. This is why many women are turning to an Idaho Zofran lawyer. 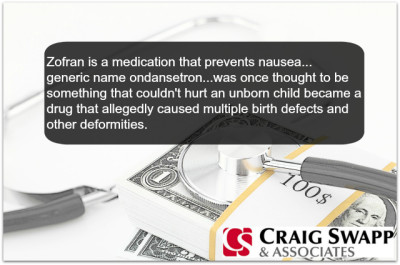 Zofran is a medication that prevents nausea. It is also known by the generic name, ondansetron.

Originally, this oral medication was designed specifically for those who were undergoing cancer treatment methods that are known to cause severe nausea.

The FDA reported it as a pregnancy schedule B drug, which means there wasn’t enough research at the time of reporting to say that it could harm an unborn child.

However, women who are undergoing chemotherapy and radiation aren’t normally pregnant or trying to get pregnant, so the need for in-depth research in this area seemed null.

In 2006, when the patent for Zofran was lost, it opened up possibilities that never should have been explored. Namely, GlaxoSmithKline began a whole new marketing campaign using the generic form of Zofran.

Their mission was to target pregnant women since pregnancy is known to cause nausea. It was effective in treating nausea, but the drug wasn’t originally designed for this purpose.

What was once thought to be something that couldn’t hurt an unborn child became a drug that allegedly caused multiple birth defects ranging from a club foot, cleft palate, or cleft lip to deformities of the skull (craniosynostosis) and holes in the heart (septal defects). There are even reports of webbed feet and other deformities.

One of the worst parts of the case is that Glaxo is said to have known that the drug passed through the placenta as early as 1992, but did nothing to warn anyone, including expectant mothers.

In fact, part of the charges against this company are fraud charges not just for withholding information, but for offering doctors a financial incentive to prescribe this drug.

In this case, if Glaxo is proven to have known the dangers of Zofran and did not notify users, they may be held responsible for the resulting damages. A similar defective drug is Xarelto which has also put several individuals at risk.

Many mothers today are still unaware that the birth defects their children suffer from may have developed as a result of taking the drug Zofran while they were pregnant.

As more mothers become aware, they may find some solace after speaking with an Idaho Zofran lawyer. They may be able to recover punitive damages as a result of the lawsuit, which won’t erase the drug manufacturer’s negligence, but may help cover some of their children’s medical needs.

When you are dealing with injuries caused by product or drug manufacturers, it can be difficult getting the compensation you deserve. In order to ensure you receive a fair and legal resolution for the damages caused, you need a qualified Idaho Zofran lawyer.

If you or someone you love has taken Zofran, it’s important that you contact Craig Swapp & Associates online or call (800) 404-9000 immediately for a free consultation.