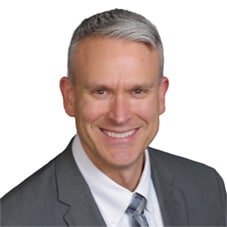 Glenn attended Ricks College and Idaho State University before graduating from Brigham Young University in 1997 with a bachelor’s of science degree in Political Science. He completed his Juris Doctorate at the University of Idaho College of Law in 2001. While in law school, he served as the Student Bar Association President.

Following his law school graduation in 2001, Glenn began his law practice as a solo practitioner in Bountiful, Utah. In 2002, he joined the largest bankruptcy firm in the state of Utah and managed its northern Utah office. In 2003, he joined Olympus Capital Alliance/The Cypress Fund LLC as Chief Legal Officer. He returned home to Idaho in 2008 after accepting a position with May, Browning & May in Boise. In, 2011, Glenn started his own bankruptcy practice – Godfrey Law, PLLC – in Eagle, Idaho.

His personal interests include spending time with his family, traveling and golf.